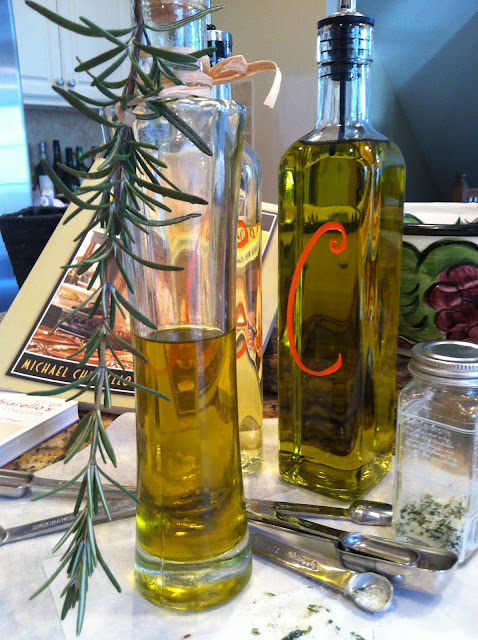 When I recently made Spaghetti Squash Spaghetti , I took some time to reacquaint myself with Chef Michael Chiarello's Tra Vigne cookbook.  One of the things I like about his cookbooks is along with the featured recipes, he always provides side notes on "Chef's Tips", "Entertaining Notes", or "Wine Notes", that are helpful and educational.  I discovered a Chef's Tip for frying rosemary.
Rosemary is one of my favorite herbs.  Smelling it makes me smile.  My outdoor rosemary shrubs usually last throughout the winter, maybe getting just a bit brown.  I take great pleasure in walking out my backdoor, trudging through the snow to snip off a stem or two of rosemary.  When I saw this tip for frying rosemary, I had to make it.  Chef's instructions were to deep fry it.  I did not want to drag out my deep fryer just to fry a sprig of rosemary.  So I improvised.  I took a shallow saute pan; poured in about a cup of olive oil.  I heated the olive oil and gently added the sprigs of rosemary.  They sizzled right away.  I let them sizzle in the olive oil for about 60 seconds.  When most of the sizzling subsided, I removed them to drain on a paper towel. 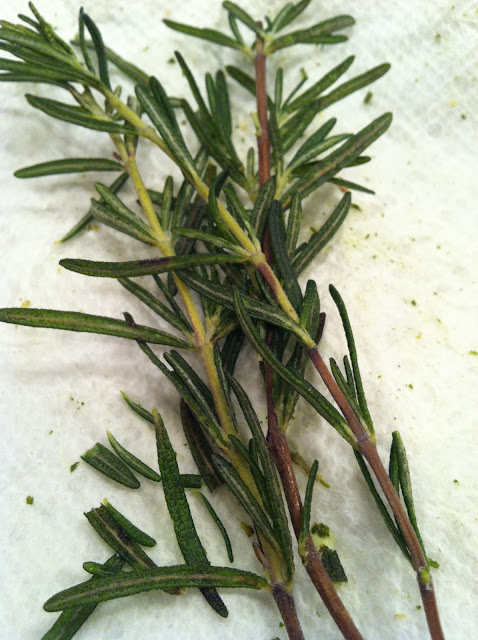 Once they were cool, Chef Chiarello's notes explained that the crisp rosemary could be added to salt and other spices to make a seasoned salt.  But now what to do with the olive oil.  I hated to waste it.  I then realized that I had made rosemary flavored olive oil.  I strained it into a jar and have been using it in my cooking this week. 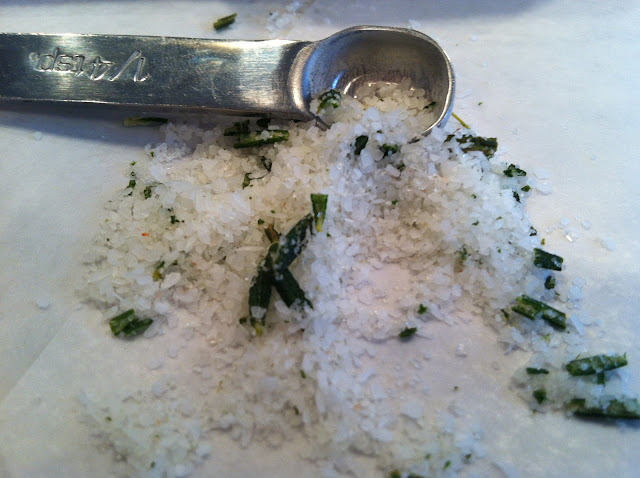 Next day, I sautéed chicken breasts in the rosemary olive oil.  They came out beautifully browned and with just a hint of rosemary.  They were delicious in a chicken sandwich.

The oil or the salt would be wonderful with beef or lamb.  I would love to grill a steak and finish it with a sprinkle of the rosemary salt and a drizzle of rosemary oil.  That would be beautiful.  Or use the salt and oil with roasted or baked potatoes.  A drizzle of oil on grilled or toasted bread would be nice with melted cheese and honey.

If you decide to make the fried rosemary, rosemary salt and olive oil, be sure to use them within a week's time.  These are not meant to be stored for long term use.  Honestly, I can think of so many ways to use these.  Eggs, cheese, grains pastas, any savory food really.

Place the olive oil in a small sauté pan over medium high heat.  Once the oil is hot, add the sprigs of rosemary for 60 seconds.  Remove to a paper towel to drain.

Rosemary Olive Oil
Once the oil from the fried rosemary has cooled, pour through a funnel into a bottle or jar.  Use within 1 week.

This puff pastry citrus tart can be made any time of year but is especially good during the winter.  Making this colorful tart in winte... 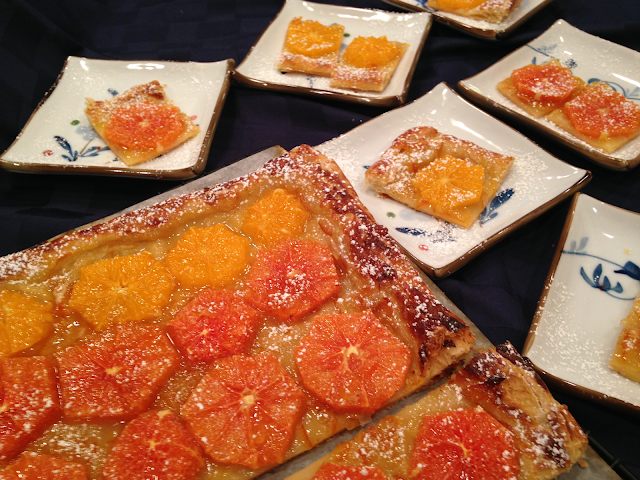