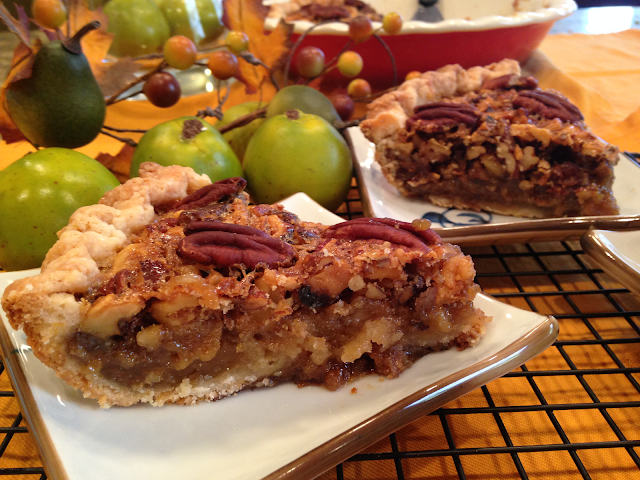 Sometimes, making an error in a recipe can lead to an improvement.  One of the most famous examples of this is with the well-known chef Jean-George Vongerichten and his molten chocolate cake recipe.  Other times, it can lead to disaster.  This time, my error in measurement was all in my favor.

I was following along in my "make always" pecan pie recipe when I did not realize I had used the 1/3 cup for the sugar when the recipe calls for the 1/2 cup.  I realized my error as I was cleaning up, pie in the oven, and saw that the 1/2 cup was still clean, but the 1/3 cup had sugar residue in it.  Hmmmm.  What had I done?  I had tasted the sugary batter before putting the pie into the oven, so I knew it was delicious, but did I really use less sugar?  I was now certain that I had, wondering what the fully baked outcome would be.  Turns out, it was the best pecan pie ever.  Good fortune for me.
Maybe what threw me off was my decision to alter my standard pecan pie recipe by using  toasted pecans and toasted walnuts.  The two nuts are different in taste, but also complement each other.  I had also decided to increase the salt in the recipe, making a play on the salty-caramel duo.  No change with the bourbon.  I always use bourbon in my pecan pie.

As I anxiously waited for the pie to cool, it looked and smelled wonderful.  Much later as I cut my first slice of pie, took that first bite... oh my.  This was dangerously delicious as in I might eat the entire pie in one day kind of delicious.  This pie was all about the nuts.  The pecans and the walnuts were so good together with less sugar to get in the way of their nutty flavor.  The slightly elevated hit of salt on the palette also balanced the sweet.  This new fortuitous recipe is truly my "make always" pecan pie recipe.

Roll out 1 pie dough disk on a floured surface to fit a 9-inch pie pan, roughly 12 inches round.  Transfer the dough to the pie pan, crimp the edge decoratively.  Refrigerate while making the pie filling.

Preheat oven to 350 degrees, positioning the rack in the center of the oven.
Whisk the eggs in a large bowl.  Whisk in the sugars.  Stir in the corn syrup, melted butter, bourbon, salt and nuts until combined.  Transfer the filling to the prepared crust.  Place whole nuts decoratively on top of the filling for a pretty appearance, if desired.

Bake the pie for roughly 55 minutes.  The filling should be puffed and just set in the center.  Remove from the oven, allowing the pie to cool completely.  Serve and enjoy. 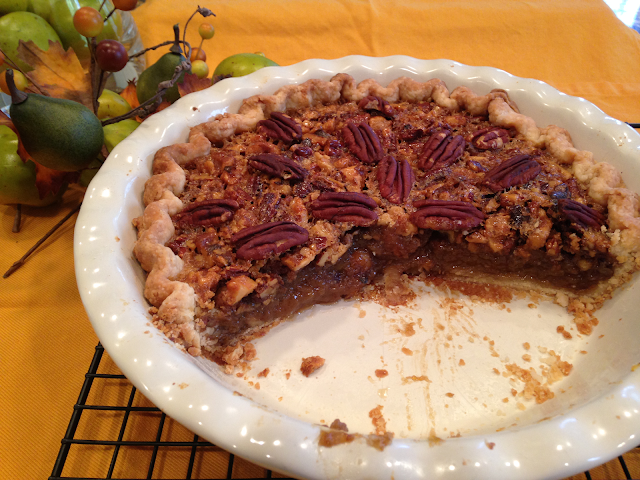 Seared scallops are a special occasion meal that needs little adornment.  But, proper buying and cooking is essential.  First, a bit ... 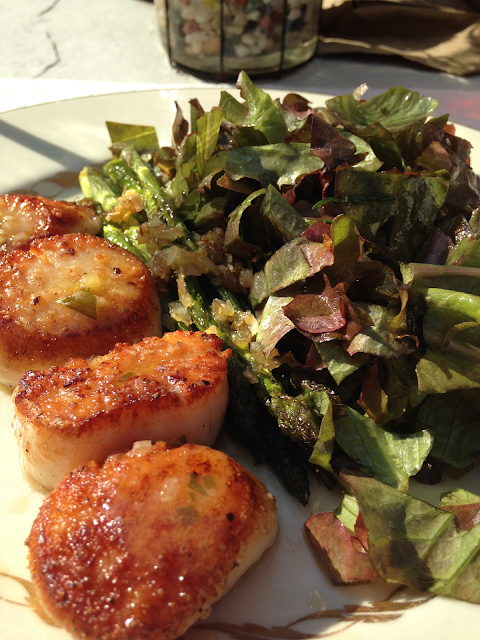