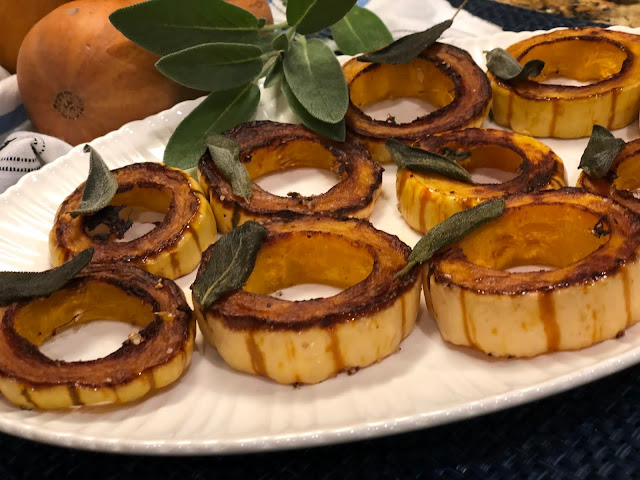 This squash dish is so simple to make and perfect for the fall holiday season.  Delicata squash may be unfamiliar to some people, unlike the more common butternut and acorn squashes.  The flesh is lighter in color and a bit more potato-like in texture and taste.  I occasionally will dice the squash and cook it in a skillet for breakfast hash browns instead of using potatoes.  As the name suggests, there is no need to remove the skin because it is delicate and can be eaten.  A real plus since autumn squashes can be quite a challenge to peel.

The sage leaves I use here get crispy-roasted and fragrant.  The crackle of the delicate leaves are eaten along with the squash adding an herby flavor that pairs well with poultry.  Thus, making this side dish a nice accompaniment to your holiday turkey or simply served on a weekday with pan-seared chicken.

Preheat the oven to 400 degrees.

Wash and dry the squash.  Working with a cutting board, slice the squash into rings.  Remove the seeds and discard.  Place the squash rings onto a large sheet pan, drizzle with olive oil, turning them over to evenly coat with the oil.  Place a sage leaf on each squash ring.  Season with salt and pepper. 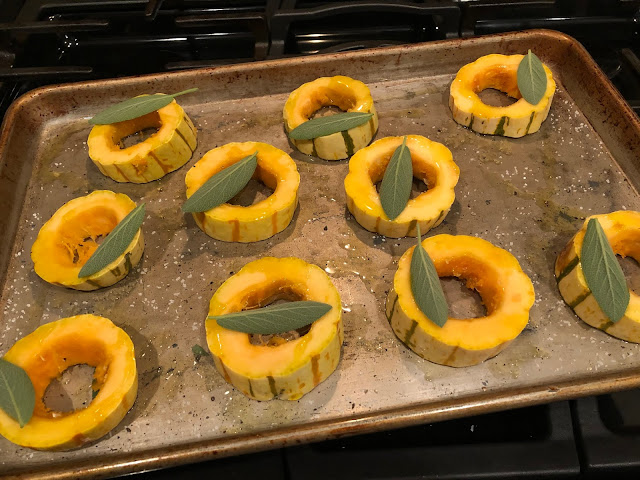 Place the sheet pan into the hot oven, roasting for 20-25 minutes until the squash is golden brown and the sage leaves are crisp.  The squash rings are not turned over during the cooking process. Serve warm or at room temperature.

Bonus Cooking Tip:  Leftover squash can be diced and made into hash browns the next day for breakfast.  I sautéed some diced onions in butter and oil until soft.  Then I added the leftover diced squash, a pinch of salt and pepper, stirring until warmed through.  Quick and delicious. 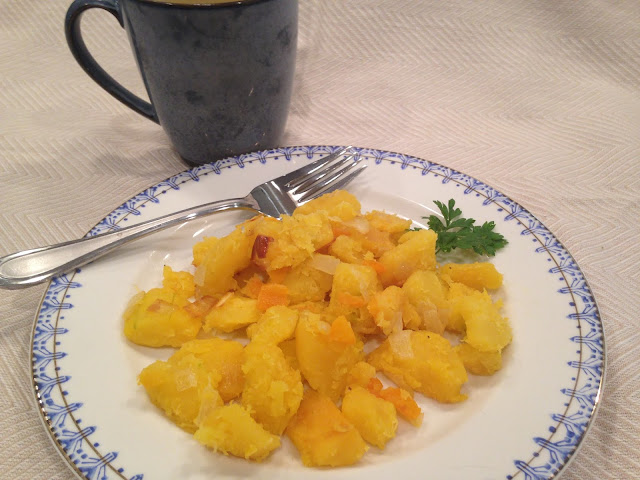 Posted by Chez Cindy at 8:59 AM No comments: 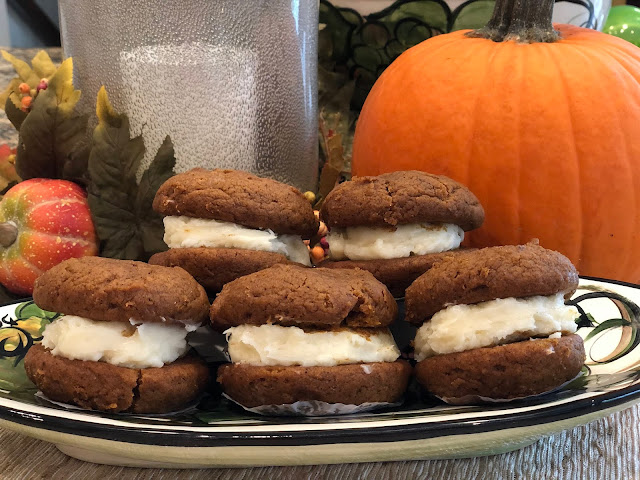 Whoopie Pies seem to be a regional sweet treat.  Said to have originated in the state of Maine, they are found in shops, farm markets, and bakeries in the surrounding New England states.  Once I became familiar with them, I was quite smitten.

Whoopie pies are kind of confusing.  They resemble a sandwich cookie.  But when you bite into this sweet treat, the texture is soft and moist like a little cake filled with a rich creamy filling.  To add to the confusion, they are named as a pie!  I think the whoopie part of the name comes from the delight and surprise from first bite, causing one to shout Whoopie!

When you read the recipe below, you may be concerned with the measurement of the spices.  What is written is correct in that, yes, the tablespoon measurement is used for the cinnamon and ginger spices, and a teaspoon of cloves.  It may seem like an error, but trust that the balance of spices is a perfect blend.

In a medium bowl, whisk together the flour, salt, baking powder, baking soda, cinnamon, ginger and cloves.  Set aside.

In a separate large mixing bowl, a stand mixer works well if you have one, combine the brown sugar and oil, mixing together until combined.  Add in the pumpkin puree, mixing to thoroughly combine.  Add in the eggs and vanilla mixing until well combined.

Add the flour mixture to the pumpkin mixture, mixing until just combined.

Using a medium spring-loaded ice cream scoop (2 tablespoons), scoop out the dough onto the prepared baking sheets, placing the dough mounds about 1-inch apart.  Or use a large spoon to spoon out 2 tablespoons shaping into a round mound.  The cookie pies will rise greatly but spread minimally.
Place the sheet trays in the center and upper part of the oven, baking the cookies for 12-13 minutes.  Rotate the sheet trays half-way through for even baking.  The cookies will be fully domed with the tops just starting to show cracks in the surface.  Remove the trays from the oven to cool, sliding the parchment sheet from the tray onto the counter.  Make the cream cheese filling while the cookies cool.

Working with an electric mixer, beat the butter until smooth.  Add in the cream cheese, mixing until combined with the butter.  Mix in the vanilla.  Add in the powdered sugar 1 cup at a time, combining with the cheese/butter mixture until thoroughly combined and fluffy.

Assemble the Whoopie Pies
Turn over half of the cooled cookies to show flat side up.  Using a small scoop, or a tablespoon, place a large dollop of filling onto the flat side of the cookie.  Place another cookie, flat side down, on top of the filling.  Press down slightly so that the filling spreads to the edges.

The Whoopie Pies can be kept room temperature for a day, or 3 days chilled in the refrigerator. 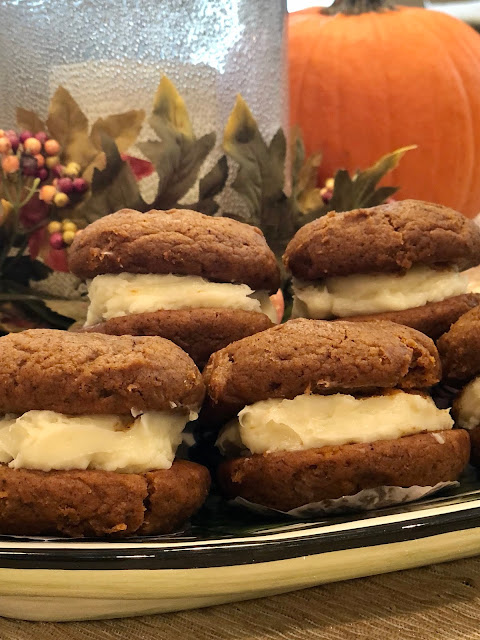 Posted by Chez Cindy at 9:14 AM No comments: 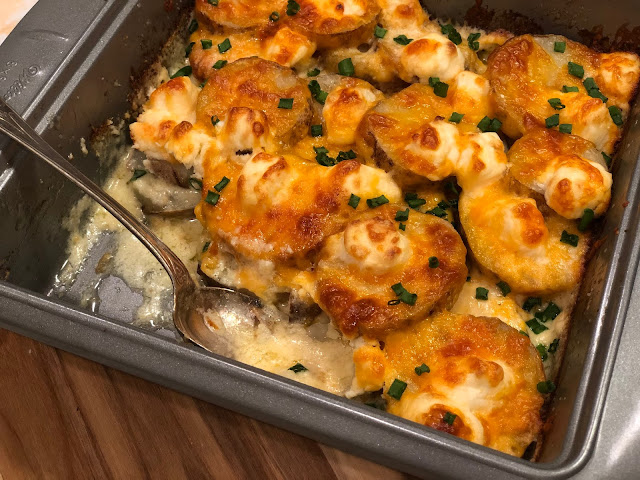 This dish comes to the rescue when you want to have baked potatoes for dinner, but are short on time.  You get all the baked potato flavor, plus the toppings of a twice-baked potato, baked in less than an hour.

I am so pleased with this dish.  I was looking for a way to do twice-baked potatoes for a cooking class, but wanted a new twist.  I was creating and testing for months, and nothing fit what I had in my mind.  I finally went rogue and created what is a cross between a potato gratin and a loaded baked potato.  This dish satisfies on all levels.

The tiny bits that look like browned marshmallows are cubed cream cheese, scattered over the potatoes.  They mostly hold their shape, getting lovely brown and soft.  The second cheese used here is shredded cheddar, melting gloriously and gooey.  I garnished only with fresh chives.  But think of the possibilities as you would for loaded baked potatoes.  When serving your family or a crowd, set out toppings of sour cream, sliced green onions, crumble bacon and more.  Each person can scoop out the potatoes and top as they desire.  So good. 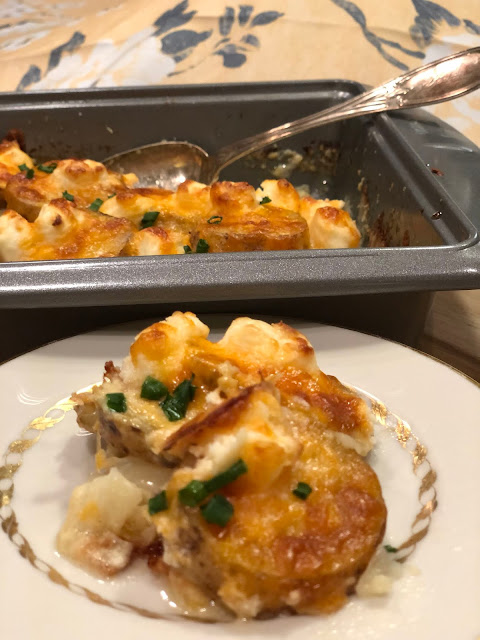 Preheat the oven to 400 degrees.

Working with a 9-inch square baking pan, use the 3 tablespoons of butter to generously coat the sides and bottom of the pan.  This will add flavor and keep the potatoes from sticking to the pan.

Thoroughly scrub the potatoes.  Keeping the skin on each potato, slice the potatoes into 1/2-inch thick slices.  Layer each potato slice into the buttered pan, fitting each slice into the pan like puzzle pieces.  Some will layer on top of each other.  Pour the heavy cream over the potatoes, sprinkle the potatoes with salt.  Cover the pan with a large sheet of foil, crimping around the edges to seal.  Bake in the hot oven for 30 minutes.

Remove the pan from the oven, carefully remove the foil from the pan.  Cut the cream cheese into 1/2-inch cubes.  Scatter the cheese cubes over the top of the hot potatoes.  Evenly sprinkle the shredded cheddar over the potatoes and cream cheese.  Return the pan to the oven, uncovered.  Continue baking for 20 minutes.  The cheeses will be melted and browned.  Remove the pan from the oven.  Allow the dish to rest for 10 minutes before serving.  Sprinkle with chopped green onion or chives, or top with crumbled cooked bacon and sour cream, if desired. 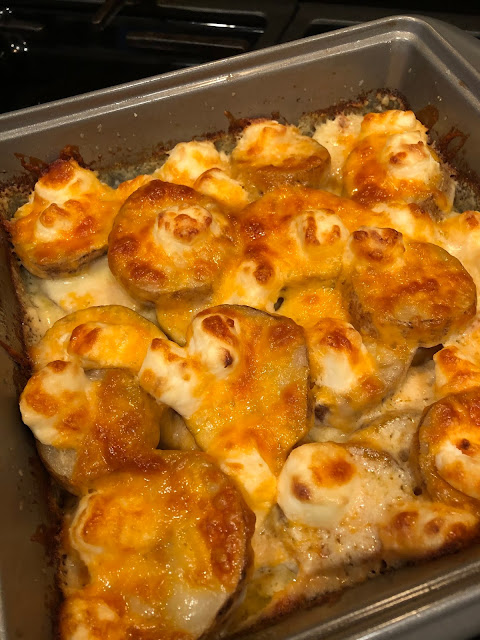 Posted by Chez Cindy at 7:54 AM No comments: 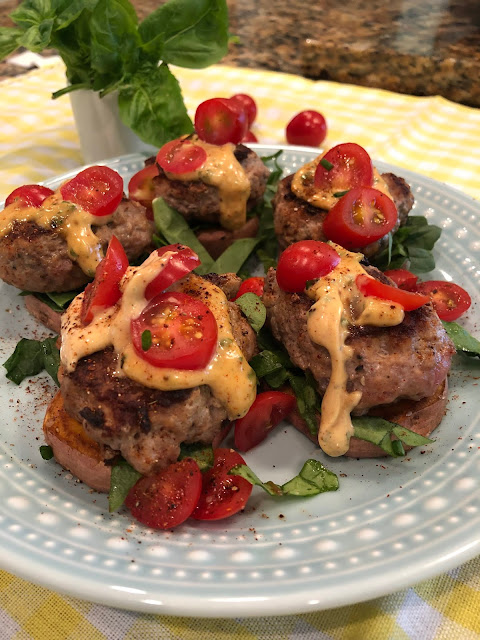