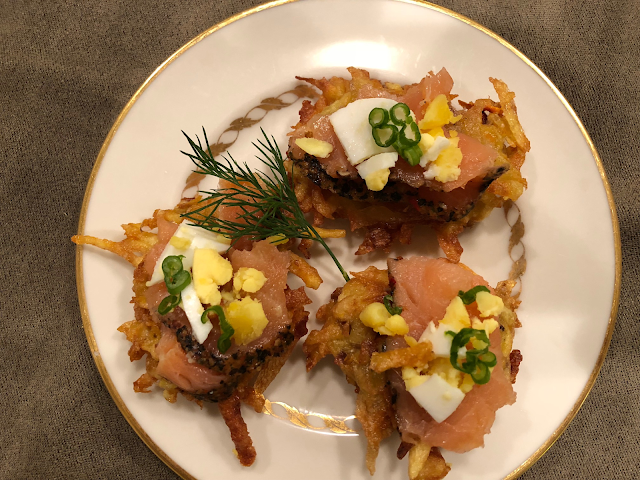 If you are looking for an easy yet impressive appetizer, this should be on your list to make.

Latkes are usually made with grated potatoes and onion.  Here, I add grated carrots to the mix to add a bit of color, flavor and texture.  Topped with smoked salmon, chopped egg and thinly sliced green onion make this a delightful savory treat.  The latkes can be made ahead of time and kept warm in a low temperature oven.  Assemble with the smoked salmon and chopped eggs right before your guests arrive.  These are also very good at room temperature, but best when served right away.

I encourage you not to shy away from making these as they are not difficult to make.  Promise.  If you are not a fan of smoked salmon, simply serve these plain, lightly salted, with a dollop of sour cream.  These latkes would be perfect for a cocktail party or right at home for a football bowl game.

Prepare a sheet tray lining it with paper towels and a wire rack set on top of the paper towels.  This is where the cooked latkes will be placed when removed from the hot oil.

To make the latkes:  Using a food processor fitted with the grating blade, or use a box grater, grate the potatoes, carrots, and the onion.  Transfer to a large kitchen towel. Gather the towel tightly around the potato mixture and squeeze out as much liquid as possible.

Transfer the potato mixture to a large bowl.  Add the egg, 3 tablespoons of flour, salt and pepper.  Stir until blended.

In a large cast iron pan or electric skillet, add enough oil to cover the bottom to 1/4 inch depth.  Heat the oil to 365 degrees.  Transfer 1 tablespoon of the potato mix into the pan, gently pressing the mound to flatten slightly.  Continue to fill the pan, allowing space between each potato mound.  Cook until the edges turn crisp and brown.  Carefully flip to continue cooking on the second side.  Transfer the cooked latkes to the prepared tray onto the wire rack.  Sprinkle with additional salt.  Keep warm in a low temperature oven until ready to assemble with toppings and serve.

Earlier this week, I like many "foodies" across America, acknowledged what would have been the 100th birthday of Julia Child.  ... 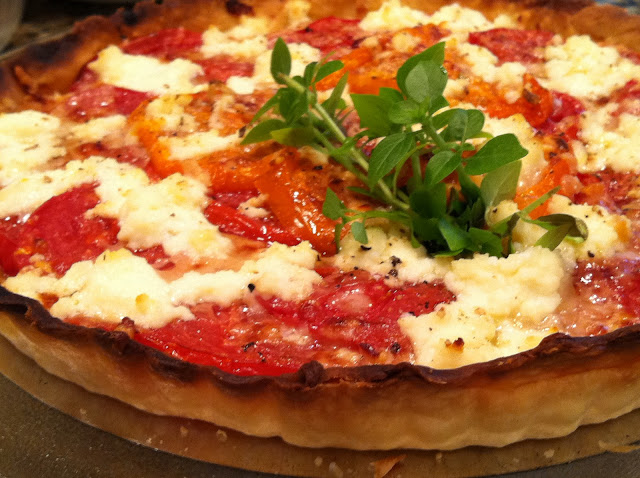